Recently there has been a fair amount of press over a disease called Alabama Rot affecting dogs around the UK.  We have written this short piece containing information to help answer your questions but most importantly, how to help keep your dogs safe.

What is Alabama Rot?

Cutaneous and Renal Glomerular Vasculopathy (CRGV) which is a bit of a mouthful of a name is a disease also sometimes called, and more catchily, Alabama Rot – after a disease in greyhounds in Alabama USA in the 1980’s to which it bears some similarities. CRGV is a disease characterised by sores usually on the paws or bottom part of the dog’s legs however they do occasionally appear on the belly or tongue.

Tiny blood clots then form in the blood vessels which blocks them causing damage to the affected tissue. So in the skin, this causes ulceration but in the kidneys, it causes severe organ failure.  These skin sores tend to be non-healing however it is when the dog develops an acute kidney failure it is often fatal. Since November 2012 more than 150 dogs have been struck by this disease in over 37 different counties.

Unfortunately, the disease can only be identified for certain after death by looking at the kidney tissue at post-mortem – although vets can often presume diagnosis through the clinical signs your dog presents with. The distribution of the disease also appears to be seasonal with most cases between November and May however with the cause unknown an environmental issue is hard to identify.

Thankfully for us here in Rochford there have been no confirmed cases in Essex to date.

What to look out for?

The signs seen in affected dogs typically start with skin sores as seen in these images: 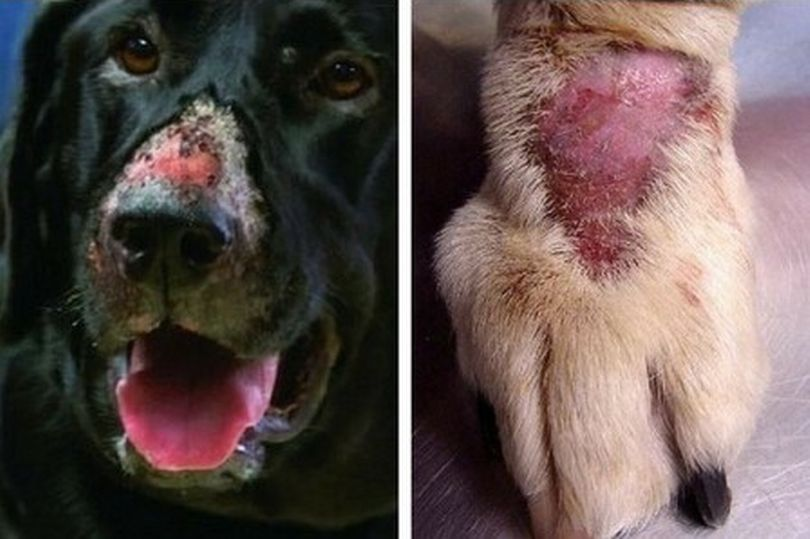 Although the sores are most often on the legs, they can sometimes be seen on the body or face. Some dogs only get skin sores/lesions without ever getting any blood test changes (mostly kidney related).  Dogs suspected to be suffering from CRGV need intensive management at your veterinary practice or a referral centre.

Unfortunately, a large number of dogs that develop kidney failure from this disease do not survive; however, there are a number of suspected survivors (remembering the disease can only be confirmed on kidney tissue analysis, hence the use of the term suspected) and the outlook is not always hopeless. The skin lesions themselves usually just require cleaning and antibiotics but if blood changes are seen in relation to the kidneys IV fluids and supportive care are needed.

How to prevent it?

A range of breeds has been identified with CRGV in the UK. Some of the more commonly affected breeds include the English Springer Spaniel, Labrador Retriever and Hungarian Vizsla. There does not appear to be a particular age or sex of dog that is more likely to develop the disease. Given the cause is unknown, it is hard to give any preventative advice that has any scientific research to support it. Some people have suggested washing dogs after a walk, just in case they are picking up the disease whilst out walking, for example, going through mud or water particularly in areas where it appears to occur more.

Regularly check over your dogs, especially if you have a long-haired breed. Look for sore skin or lesions that might not have been there before.

Research into CRGV is ongoing and a national charity, the Alabama Rot Research Fund has been set up to try and raise funds for research into this condition.

What do you do if you think your dog may have it?

The key take-home message is if you see an unexplained skin sore on your dog then bring your dog to the vets but remember, the disease is a rare one and the sore is most unlikely to be the result of CRGV, however it should be checked out just in case.